This report argues that the government should reverse its plans to double the current amount of free childcare for three and four year olds of ‘working families’ to thirty hours.

Our proposals would allow government to significantly expand its free childcare offer to low-income families, providing them greater freedom and flexibility when returning to work. Moreover our recommended model would cost £64 million less than government’s proposed extension whilst being more sustainable for childcare providers.

1. Government should reverse its planned extension of free childcare

Childcare providers have raised many concerns about the allocated funding levels for government’s extension of free childcare. We have calculated that the funding arrangements for 2017/18 will lead to a £103.5 million black hole for childcare providers. This will have to be absorbed by providers (via top up fees for ‘free’ places) or, alternatively, providers may opt out of the extension altogether.

These extra hours will cost government an estimated £1.6 billion. Even with this significant investment, 57.1% of three and four year olds (many of whom will be from low income families) will be ineligible for this scheme.

2. Expand free childcare hours for the worse off

This means-test for free childcare would be based on the methodology of current provision for disadvantaged families with two year olds. This includes, but is not limited to, families receiving: Income Support, income-based Jobseeker’s Allowance, tax credits (with an annual income of under £16,190 before tax) and Universal Credit.

We estimate that 24.1% of one, three and four year old children will be eligible for this expansion of free childcare 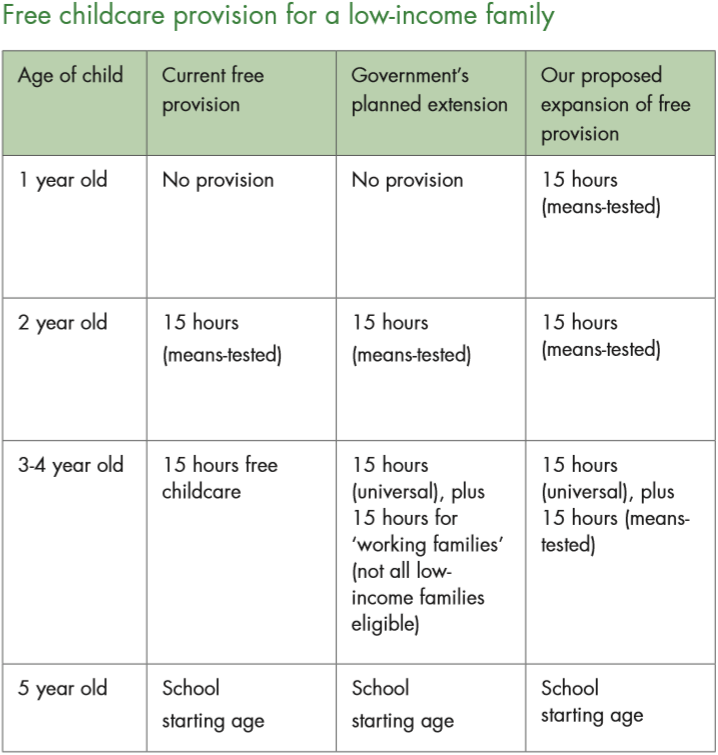 The report argues that, compared to government’s proposed extension, this alternative model of free childcare allocation would ease the burden on childcare providers. With an estimated 24.1% of children eligible – compared to 42.9% in government’s planned extension – there is increased scope for providers to make ends meet through cross-subsidisation.

Also, given that the criteria for means-tested free childcare and the Early Years Pupil Premium are closely aligned, childcare providers will receive more funding for three and four year old children. Although local authorities will centrally retain a proportion, providers will receive much closer to £5.47 per child per hour rather than the current average of £4.94. This increased funding will not cost the government any more money than its current proposed extension.

Liam Booth-Smith, Chief Executive of Localis, said: “Government are right to want to make childcare more affordable but it’s irresponsible to overheat the childcare market by placing an additional financial burden on providers. The risk is you create a similar situation to the one we face in social care, where providers aren’t able to make ends meet because the subsidy the government provides doesn’t cover the cost of care.

Our new report takes the principle of expanding affordable childcare but offers an alternative proposal which focuses on the lowest income families. Not only does this target the benefit to those most in need and expands the age range at which it is available, but it also saves the Treasury £64 million in the process.”

To find out more about this research project please contact kulvir.channa@localis.org.uk.