Home  >  Research  >  The Making of an Industrial Strategy

This report makes the case for a locally-led industrial strategy. It argues that to turn a national industrial strategy into local economic renewal, places and their leaders should be provided the space and powers by government to lead from the front. In short places should take control of their local industrial strategy, with greater influence over the effects of globalisation in their area and augmented powers to encourage greater economic prosperity. The report’s foreword is written by Rt Hon Greg Clark MP, Secretary of State, Department for Business, Energy and Industrial Strategy.

The prime minister has signalled an ambition to set a new economic direction. The industrial strategy will be more ambitious and activist than recent administrations have been prepared to adopt, which will “help to deliver a stronger economy and a fairer society – where wealth and opportunity are spread across every community in our United Kingdom, not just the most prosperous places in London and the South East”. Allied to this new approach is the view that our understanding of economic success must be deeper than measures such as national GDP and should now include a greater focus on the local impact. As Greg Clark has said: “Governments are fond of quoting national figures – of economic growth, of productivity, of employment. But the truth is economic growth does not exist in the abstract. It happens in particular places.”

Building on the ambitions set out in the government’s industrial strategy green paper, this report is a road map for turning the prime minister’s stated aims into practice. It considers:

How government can bring the industrial strategy to life

For the industrial strategy to be successful it must address the underlying political imperative behind it; the need to see growth and its benefits shared more widely. We argue that to achieve this the industrial strategy must put place at the centre and be led locally. We explain precisely who should be responsible for leading it and organisational form they take. We also make clear how places currently can take a leading role and how they should be strategically planning for future economic growth. However, there remains a limit to the value which can be created without additional powers being devolved. Now is the time for government to give places the opportunity to help themselves so that everywhere has the potential to play an important part in a great economic renewal.

Recommendation 1: an industrial compact so that places can lead the industrial strategy

Each strategic authority should receive a suite of powers which will enable them to overcome barriers to growth and compete with global counterparts. Power transfer should be automatic, avoiding the attrition of negotiation that affected the city and devolution deals. A selection of the key powers is included below.

From 2018 government should replace European structural funds and the Local Growth Fund with a single pot, the Accelerated Growth Fund. While government should set the national priorities this fund should target – and where relevant, honour existing agreements – its allocation mechanism should be devolved to strategic authorities, who are best-placed to identify their local structural barriers to growth. As part of this, strategic authority chief executives (or similar) should become the accounting officer for the Fund.

For a local leader to govern a place to its full economic potential, they must be given greater fiscal flexibilities, particularly if they are being encouraged to take a lead on revenue generation. We make a number of recommendations that would enable the creation of more competitive local economies.

Despite their differences, stifled and stuck places share the problem of capacity. For the stifled, it is literal geographic capacity – there isn’t enough land on which to build. For the stuck, it is leadership capacity.

One commitment made in the government’s industrial strategy green paper is a Cabinet Office review of the location of government agencies and cultural institutions. Complementing this, we believe strategic authorities should be given a statutory right to propose public sector relocation. For instance, Leeds City Region could propose the relocation of the Department of Health, Health Education England and additional elements of NHS England. This would build on the city’s health innovation sector.

Where are the stifled and the stuck? 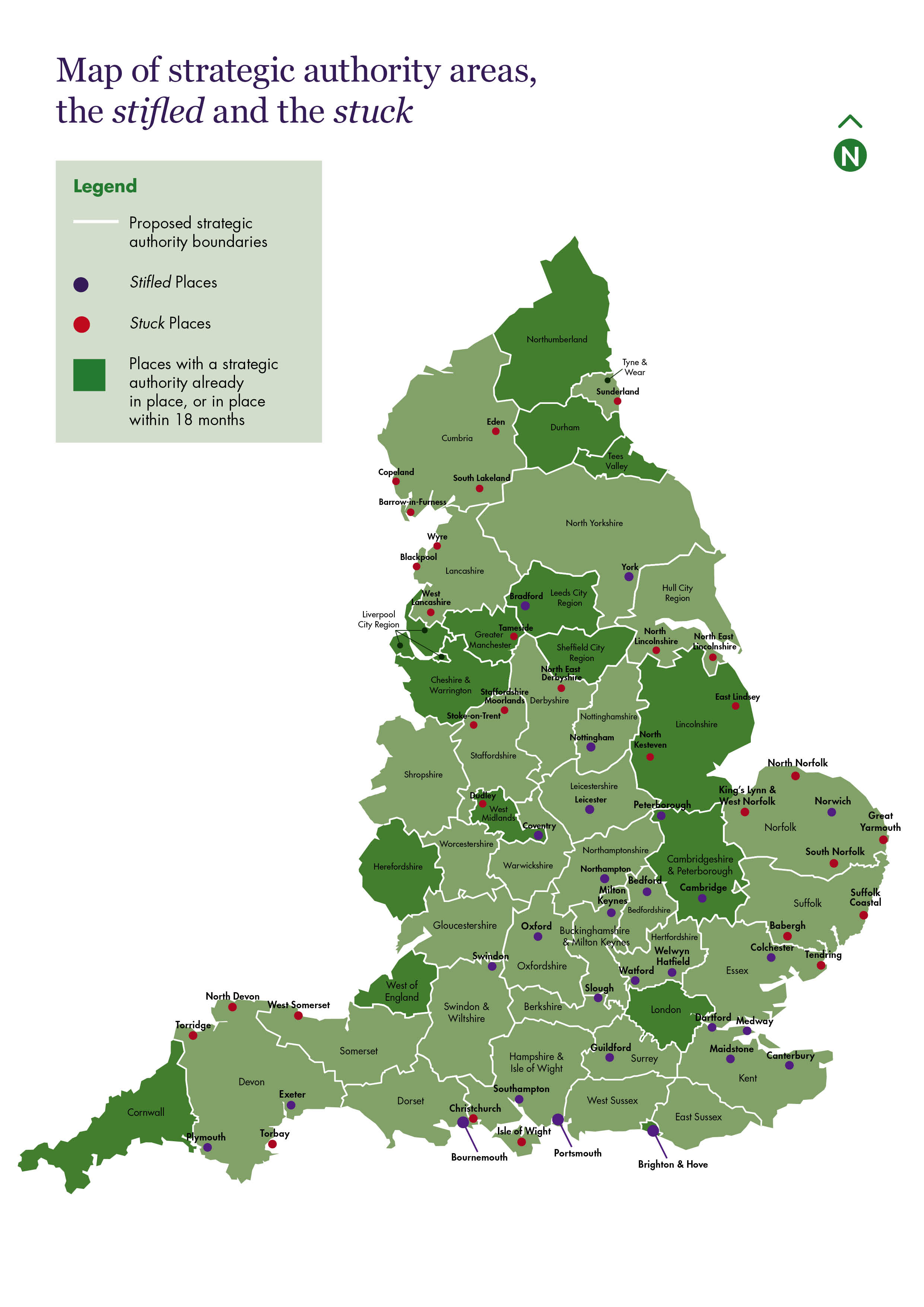 A locally-led industrial strategy in practice 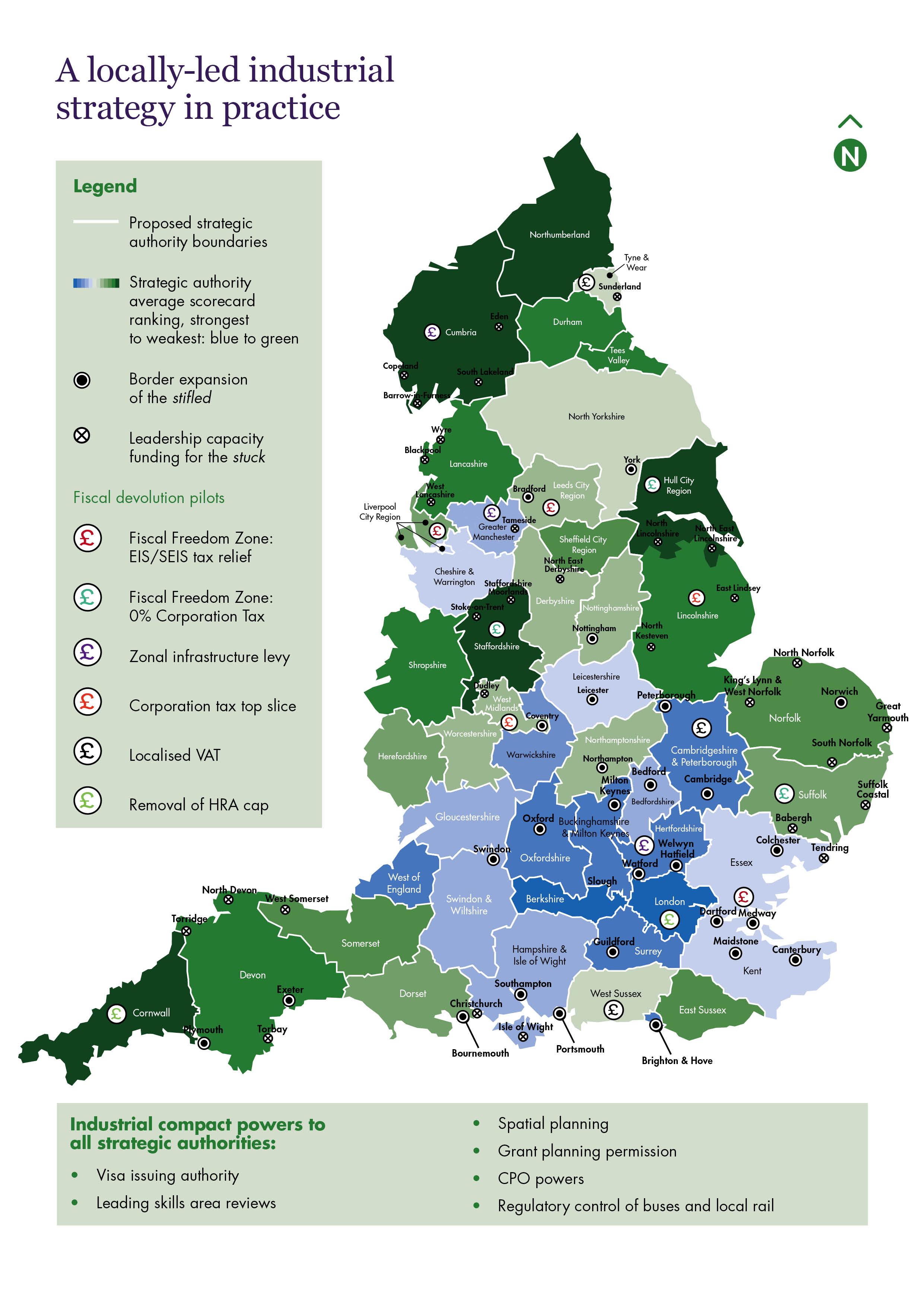 This research project was supported by an Advisory Panel, whose members are listed below. Advisory Panel members attended two editorial roundtables and provided comments on report drafts. They may not necessarily agree with every analysis and recommendation made in the report.

To find out more about this research project please contact jack.airey@localis.org.uk.